Or just look backstage at the production site of well-known TV shows and soaps? The studio tour "TV-Backstage-Tour" or the "PROMI TV-Backstage-Tour" with actor, TV-Coach and UNTERS serie Holger Franke himself is exactly the right thing for you!

The MMC Film & TV Studios Cologne - home to TV series such as "Unter uns" or "Alles was zählt" and the production site of numerous TV shows such as "Let's Dance", "The German Comedy Award", "The Game Begins!", "Die Cave of the Lions "," X Factor "," Awesome Bye "and many more. Be there, where Sir Ben Kingsley went down in cinematic history in the historical epic "The Medicus".
See how a studio or series set is equipped, how to make green screen shots, how many people are needed to make a TV production, what happens during the commercial breaks, or what it feels like to be in front of the camera stand.

TV film workshop including TV backstage tour, with a look behind the scenes! 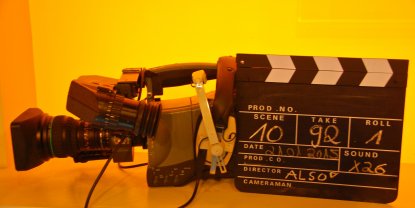 This is how TV works!

Take on the role of moderator or stand against the camera. Look over the director's shoulder or just sit in the audience.

On a TV Backstage studio tour behind the scenes of Europe's most modern studio space, you will learn how a program is produced, which and how many employees are required for it and take a look into directing, Aussensets and studio rooms. As a special highlight, you then have the opportunity to produce your own talk show in the MMC Studio 47 with the support of professional TV makers.

Depending on the talent and the fun, everyone can look for their role or just sit in the audience! Everything is cut live and edited! The edited DVD with your LOGO will be sent to you in the following days.

A unique experience that everyone will enjoy for a long time!

All information at our partner under www.Helikon-Events.de
Available in German language only!

All tours are booked directly at our partner Helikon-Events and billed and executed by him! Limited space at all events!